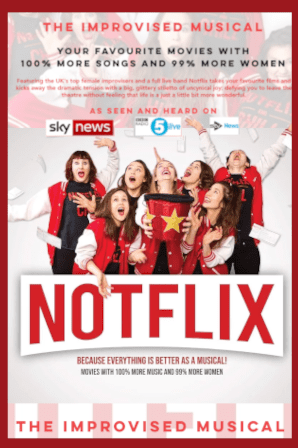 Notflix is a totally improvised comedy musical based on an audience member's suggestion of a favourite movie, then using the location, key scenes and characters as a jumping-off point to create a brand new narrative. All scenes, songs and vocals are improvised spontaneously by the cast and a live band with no preparation or planning. It's improv, so every show is different; but what remains the same is a joy-filled, high camp, musical celebration of everything you wish a movie could be.As a demonstration of its underground, (almost) overnight success Notflix has received widespread critical acclaim, including; Award-winning, five stars, total sell-out runs at the Edinburgh Fringe 2016 – 2019 in the Gilded Balloon's flagship venue, the Debating Hall. Award-winning total sell-out runs at The Vaults Festival 2017 and 2018. Total sell-out run at The Brighton Fringe 2017 and 2018. Recommended as Pick of the Fringe in the Evening Standard, The Sunday Times, Marie Claire and Elle Magazine. Semifinalists in the Musical Comedy Awards and the Laughing Horse New Act of the Year.  As seen on Sky News, STV and as House Band on Radio 5 Live.

Notflix. Because everything is better as a musical!

This year, the Queen’s Hall is taking the entertainment outside to our Performing Arts Centres Lawn. Join us: bring a picnic; your fluffiest blanket; your favourite deck chair, and enjoy an open-air performance! With drinks available from our bar, you can enjoy an unforgettable summer evening of entertainment under the stars! Enjoy theatre no matter the weather!If in the event of harsh weather, we shall be moving the performance inside to the Queens Hall Theatre. You will be notified in good time of any changes.