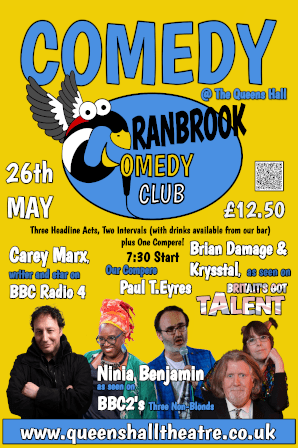 If you're looking to chuckle till you snort,  giggle till you cry and laugh until it hurts, then come and join us at The Queens Hall Theatre for The Cranbrook Comedy Club. We will make sure you're cracking up, splitting your sides and rolling in the aisles.

Mark Simmons has had to pull out due to a TV appearance, it's probably better for his career than the Cranbrook Comedy Club, so we will forgive him (in time

). We will be updating our posters and contacting our existing ticket holders shortly but until then we are delighted to announce Mark's (even better in our opinion) replacement and it's two for the price of one, Woop Woop!

Brian Damage & KrysstalThe Guitar-strumming comic (Brian) and his sidekick (the glamorous Krysstal) who have appeared on Britain's Got Talent this year (2022). www.youtube.com/watch?v=INuNmwlXPn8 . They previously ran Pear-Shaped comedy club in London, cheekily billed as 'London's second worst comedy club.  Bizarrely the only social media we can find them on is Myspace… surely this is part of their act?
" Legendary Brian Damage and top strangely straight-woman Krysstal are a one-off cross-genre act but they have echoes of The Bonzos, the heyday of music hall and some rather seedy country and western club. I laughed like a drain" Chortle ★★★★. " As daft and charming as they are funny" The Stage. "If you like daft stuff you'll love their new album" TIME OUT (London).

Ninia Benjamin, frequently appears at the Edinburgh Festival. She is also known for the BBC TV shows 3 Non-Blondes and Twisted Tales. Ninia has also featured in Lenny Henry’s BBC One show "Len on the One". She is becoming a regular reality TV regular, appearing in Sky One’s Cirque Du Celebrity and BBC Three's Celebrity Scissorhands. https://youtu.be/7I4Ej5J2las . If you recognise her voice but you're not sure where from then maybe you've overheard your kids watching the CBBC children's programme Tinga Tinga Tales. She provides the voices for the characters Eagle and Mosquito. "Bursting onto the stage in an explosion of energy, bombastic Benjamin certainly makes an attention-grabbing entrance" Chortle.

Our compere Paul T.Eyres who began his stand-up comedy career in 2005, and has since performed well over 500 gigs around the UK and abroad. Performing at such clubs as Jongleurs, The Comedy Store and London’s Comedy Cafe, his very energetic, highly interactive and yet slightly surreal brand of humour is creating a real buzz around the comedy circuit. https://youtu.be/VqM6zwDzVHE

Check out our partners https://www.standupforhumanity.co.uk/